As the only child from a family of billionaires, information and pictures of Valentina Paloma Pinault remain elusive up to this day. Her mother is a millionaire that gained success through the film industry after being a Mexican American actress, producer, and director – Salma Valgarma Hayek Jimenez.

After marrying a French billionaire business tycoon named François-Henri Pinault, Salma Valgarma Hayek Jimenez became Salma Hayek Pinault. With this biological tree, a star-studded life accompanied by immense fortune awaited their daughter, Valentina Paloma Pinault. In this life, Valentina is not one name that the wheel of fortune landed on after spinning. She is the wheel of fortune in its entirety.

Amidst the family’s massive background in Hollywood and their billionaire status, they practice privacy when it comes to their only child. Some juicy deets about Valentina’s talents, hobbies, personality, and bond with her parents sometimes make the rounds online. When putting her name in the browser search bar, the internet does not offer many details. However, several articles about Valentina Paloma Pinault are available that are dated only from last year.

#1 After Valentina Paloma Pinault’s appearance at Marvel’s Eternals premier, is she set to follow the footsteps of her actress mother, Salma Hayek?

The glamorous Marvel’s Eternals premiere occurred in Los Angeles on October 18, 2021. It showcased the biggest and brightest stars of Hollywood. By privacy being primary in the Pinault household, Salma Hayek has only let her daughter in public eyes in a seldom fashion. Angelina Jolie brought her children to the event, and Salma Hayek, alongside Valentina, was also sighted together on the red carpet. It has been six years since Valentina appeared before the public on the red carpet with her mother.

Valentina’s last red carpet appearance was during the screening of The Prophet in 2015. On following her mother’s footsteps to show business, Valentina has been writing exemplary film pieces, and Hayek does not interfere with her daughter’s great interest in filmmaking. Valentina aspires to shoot a movie as a director and as the lead or actor. By having her mother as an inspiration to enter the film industry, she will surely follow her to Hollywood fame. 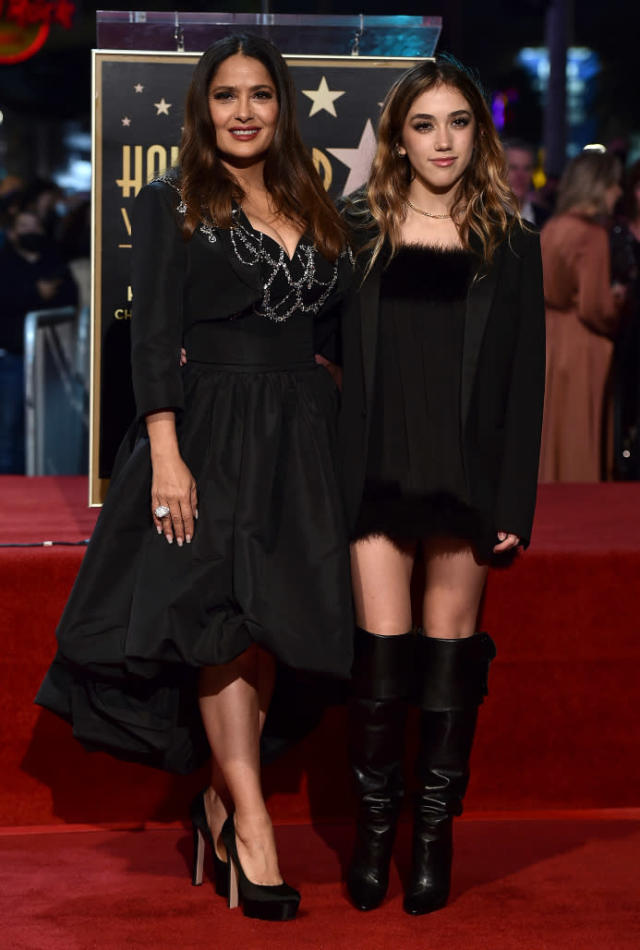 Big celebrities usually have social media accounts across Facebook, Instagram, and Twitter. Unfortunately, a quick search on the internet will not guarantee a first-class seat to obtain their social media account username so you can follow them. Still, in the name of privacy, Valentina Paloma Pinault does not have an Instagram or any personal account on social media. There is one Instagram account that bears the name of Valentina Pinault. Do not be fooled, as it is a fan page created in 2016 with ‘valentina.pinault’ as the username. The said account has 872 posts and 6,539 followers; however, its latest post dates to 2018. On the contrary, Salma Hayek Pinault has a verified Instagram account with 20 million followers. She publishes posts about her and her daughter Valentina occasionally. Her most recent Instagram post dates to October 20, 2021, with Valentina featuring them on the red carpet of Marvel’s Eternals premiere.

#3 Who is Valentina Paloma Pinault?

Many curious minds that indulge in entertainment news hunger for details about Salma Hayek’s daughter, Valentina Paloma Pinault. The articles that discuss pieces of information about Valentina contain her date of birth, her parents and their respective backgrounds or wealth, step-siblings, and net worth. There were particular highlights as to who is her father, François-Henri Pinault. To answer some of the well-sought questions about Valentina, she will turn 15 this 2022 as her birthday is September 27, 2007.

Her parents are affluent personalities that derive their fortune from their respective works. Before her parents’ marriage, Dorothée Lepère, was the first wife of François-Henri Pinault. Their matrimony ended in 2004, and he had another relationship that lasted for five months with a model named Linda Evangelista. He had Agustin James Evangelista from the model and François Pinault and Mathilde Pinault in his first marriage. In total, Valentina has three step-siblings. $40 billion is her estimated net worth of inheritance due to her father’s accumulated monetary empire. In the Kids Rich List for 2020, she garnered the sixth spot thanks to money saved for her future that amounted to $12,000,000.

Amidst Valentina Pinault’s seldom appearances for privacy reasons that are heavily implemented by her parents, she never fails to turn heads now that she is in her tween years. Since many people continue to wonder about Salma Hayek’s daughter, Valentina’s rare appearances immediately dominate the spotlight. Among the results after typing her name in the search bar is a wiki site dedicated to Valentina Pinault.

When she again appeared on the red carpet alongside both of her A-list parents, she was dubbed a head-turner. She carried glam and class so well during the Walk of Fame last year. Valentina became an icon that emanated an impeccable fashion taste. To this day, the family still values their daughter’s utmost privacy. Consecutively, a Google search will only provide similar articles among others unless it’s fresh news about Valentina Paloma Pinault.

You read about her early life here